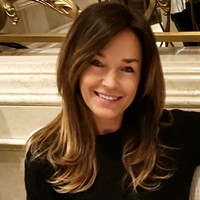 Born and raised in Riga, Latvia, Signe Drulle's passion for art developed at a very early age. During holidays to her family's countryside manor house Signe taught herself how to draw, sketching the family dog - in her doghouse with rolling hills and lush green foliage in the background. "Capturing this moment created a fire inside me that only creating art has been able to satisfy," says Signe.

Following her passion, she attended an art school in Riga and graduated with a Master’s degree in Fashion Design. She then accepted a new challenge and headed to United States. Reminiscing about first arriving in New York City she stated: "I was so inspired by how expressive this vibrant city and its people were".

After spending four eye-opening years in the heart of New York's fashion and art scene, Signe packed her bags for Miami Beach. She craved change, and Miami's sun, sand and energy was just the answer. Over the years, she has worked as a self-employed artist/painter, featured in numerous galleries and has been commissioned to produce paintings for multiple professional establishments.

Signe still ventures between New York and Miami, where she continues to pursue her passion for art and creation. Her paintings have been purchased by local and national stars, as well as international art collectors.

Product may be exchanged if we are notified by email (info@gallerylala.com) of your wish and reason to do so within 3 days of you receiving it and we (or the vendor) receives the product back within 7 days, from you receiving it. Product being returned will only be exchanged if it is shipped back to us or the vendor, as per our instructions, in the same condition (product isn’t used or damaged) and packaging that it was shipped out in. Customer is responsible for return shipping fee as well as shipping fee to receive replacement product.

Be the first to review Signe Drulle